TRENDFOCUS recently released its latest quarterly analysis, which showed that 143 exabytes of HDD and SSD capacity shipped in CQ3 on a total of 145 million units. Western Digital and Seagate led the HDD industry, while Samsung, Kingston, and SanDisk topped the SSD market.

After a disappointing 2CQ15 for hard disk drives (HDDs), the industry rebounded 7.4% in 3CQ15 to 118.59M units. This increase was due mainly to a sharp rise in CE HDD sales followed by HDDs for client PCs. Western Digital recorded an overall unit share of 43.6%, Seagate 39.8%, with Toshiba in the 3rd position with 16.5%.

In the SSD market, unit volumes totaled 26.22M units, an increase of almost 10% Q-Q. As with previous quarters, this growth is driven by the client SSD segment (for use in PCs), which only partially follows notebook PC market trends. Within the client SSD segment, modules (mainly M.2 and ‘M.2 like’) did increase as a function of the slight rebound seen in the notebook PC market. Client drive form factor (DFF) sales also increased as the channel market continued to consume a large portion of the total unit sales. Samsung still dominates in market share both in units and exabytes shipped. 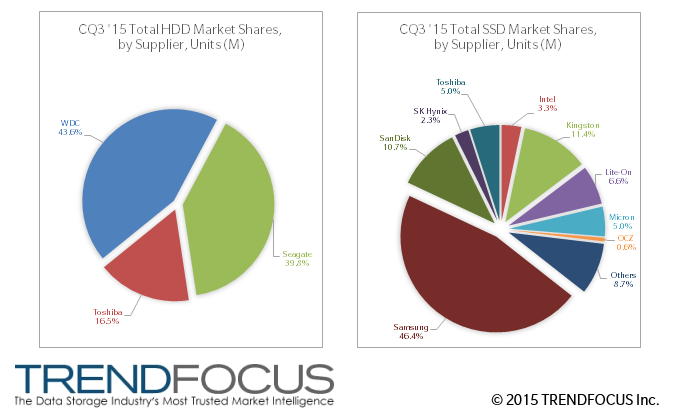