TRENDFOCUS has just released its latest NAND/SSD Quarterly update. In this latest report, covering CQ1 ’16 results and the updated quarterly forecast, all segments, both client and enterprise, saw growth from CQ4 ’15.

In an otherwise down market for HDDs, the enterprise SSD market saw growth in all segments – SATA, SAS, and PCIe. For enterprise SATA SSDs, unit growth was 5%, while SAS and PCIe saw higher growth at 6.7% and 16.3%, respectively. SAS average capacities jump significantly in CQ1 ‘16 as many system OEM companies are transitioning to a higher mix of product as being offered by multiple vendors. Although PCIe SSDs did not show as high a percentage growth as CQ4 ‘15, it did still post a 16.3% increase Q-Q. Also, PCIe SSDs still benefit from shipping the highest average capacity of all enterprise SSD interfaces.

Total Client SSDs shipped in CQ1 ‘16 topped 27 million units, an increase of 4% Q-Q. Both Drive Form Factor (DFF) and module SSDs saw a slight increase versus CQ4 ’15, DFF inched out modules as having the largest increase vs. CQ4 ‘15 with 5% Q-Q unit growth. This is a reflection of the down PC market in CQ1 ‘16 as modules are somewhat tied directly to PC demand with system OEMs. In addition, there were some share shifts in both client and enterprise SSDs in CQ1 ‘16.

The NAND industry also saw another quarter of continued growth, and NAND shipping into SSDs increased again in CQ1 ’16. Tablet, phones, and other applications consumed the balance of over 60% of the NAND output. With multiple vendors now moving to 3D NAND in the coming quarters, NAND shipments into SSDs will increase in capacity mix and bit absorption. 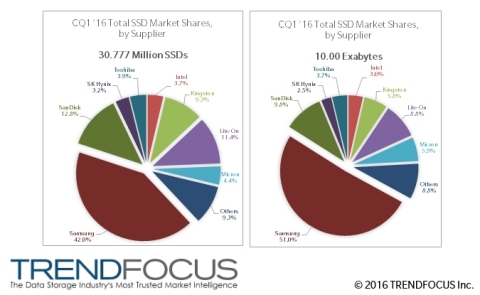 For details in any of the market segments mentioned above, including HDD heads and media components, please contact TRENDFOCUS for more information.