On August 25, The Wall Street Journal broke news of a potential merger between Western Digital and Kioxia Holdings. Both companies are long-time partners in the Flash Ventures JV, dating back to the SanDisk and Toshiba Memory days. The article suggested that the deal could be valued at $20 billion and that Western Digital’s current valuation is roughly $19 billion.

With this potential merger, the remaining vendor landscape could potentially be five total vendors: Samsung, SK Hynix/Intel, WDC/Kioxia, Micron, and to a much smaller extent, YMTC. 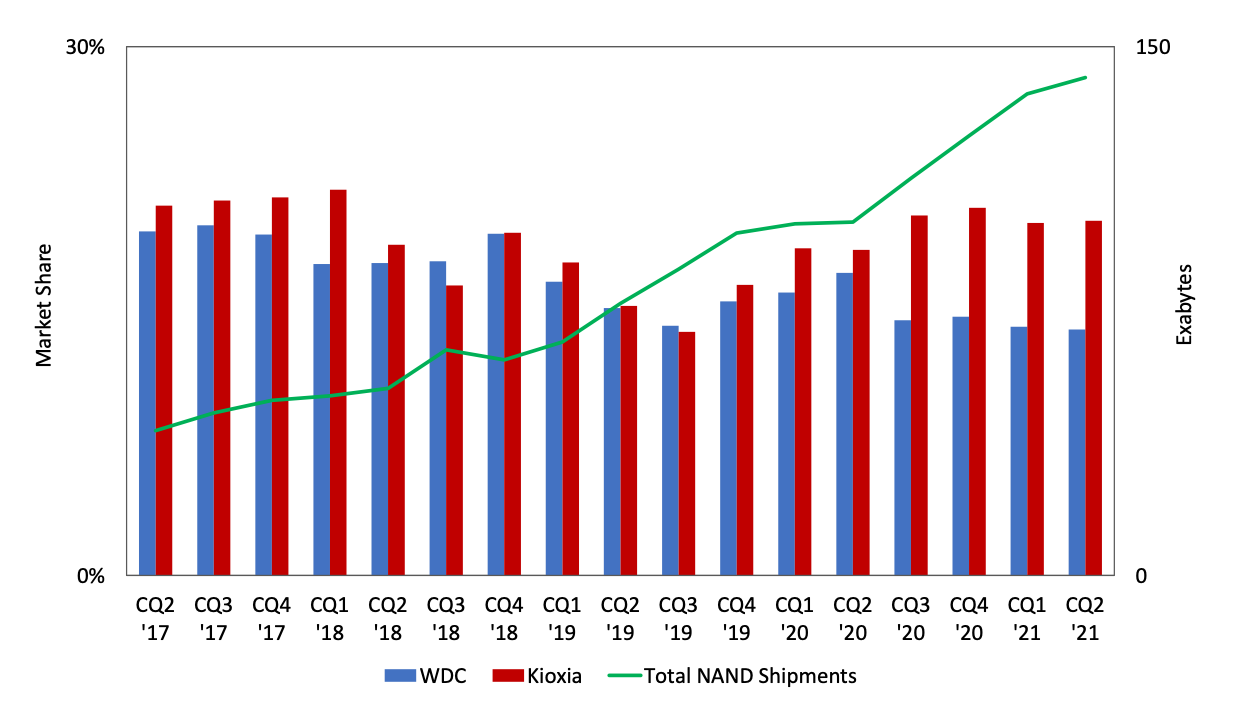 The above chart illustrates the NAND bit share of both Western Digital and Kioxia (and its predecessor, Toshiba Memory Corporation) over the past few years and includes the total NAND market bit shipments over the same period. Assuming the two companies retain the majority of their respective shares following a merger, the combined entities could become the largest NAND producer in the world.

According to the Journal, the transaction would be an all-stock deal, and the merged companies would likely be run by Western Digital’s CEO David Goeckeler. However, if the deal were to not come to fruition, Kioxia Holdings would be continuing down the path of an IPO. Kioxia’s IPO attempt last fall was received poorly by the market given the uncertainties surrounding the COVID-19 pandemic’s effect on the memory market. But since then, the pandemic has fueled significant acceleration in electronic device demand which has in turn fueled NAND demand.

The unexpected jump in device demand created a whip-saw effect in the supply chain, where semiconductor component makers fell short in production output in response to surging end-market demand for electronics products. Despite the component supply chain impact, end demand is so strong and broad-based. It spans consumer, commercial and hyperscale markets, and NAND supply continues to fall short even as component shortages prevent the production of some finished products. CQ2 ’21 earnings results clearly illustrated that NAND vendors achieved higher margins on elevated pricing and improved gross margins.

While a deal may not transpire and Kioxia may continue to pursue an IPO if talks between it and Western Digital fail, any merger would face significant regulatory approval hurdles, especially from China. The Journal article noted that several recent high-profile technology mergers and acquisitions have been met with resistance from regulators, especially out of China, a country that has significant aspirations in becoming a global semiconductor force and would likely seek to block unfavorable mergers on anti-trust grounds.

NAND is clearly on the radar for China as China-based Yangtze Memory Technologies Company, Ltd. (YMTC), seeks to become a major NAND vendor. A combined Western Digital and Kioxia would strengthen its competitiveness in NAND, with their combined share coming within a couple percentage points of Samsung. Samsung has consistently been the top NAND vendor, making up more than one-third of the worldwide NAND market on a regular basis.

If a formal announcement is made over the coming weeks, TRENDFOCUS will provide additional analysis on the NAND market segment that would be affected by a merger.